We define the animated information film as a film drawn in vector graphics. That’s graphics that can be stretched to an infinite size, without losing its resolution. And because we’re in a kind of “cartoonish” universe, it’s only the imagination that set the limit. But it has to fit with style, shape, feel and content in relation to brand, message and target audience.

Basically, it’s like an Infographic. A graphical presentation of information.

But by making information come to life, you engage the viewer and hold their attention – supporting the message visually and aurally. That’s a good way of conveying relatively “dry” information in an engaging way. And thus insure greater understanding for a larger target audience.

An animated information film is more tightly construed – messages and information are presented as they are. Without wrapping them in a narration, that develops over time, but more like an Infographic that’s alive.

But an animated information film can also be build around a story, where we, for instance, follow a person through a day, a month or just a meal. Exactly like the whiteboard- or footage-based films. Whether you’re a fan of one format or the other depends on preference and a range of different factors.

Is there, for instance, a need to transfer key messages to other media, such as employee magazines, posters or actual infographics, then computer-produced graphics might be the way forward, because graphical elements are easy to reuse in new settings. It’s also possible to use elements from the drawn whiteboard-movie and the footage-based movie, but as cut-outs or screenshots not as actual re-useable free elements. 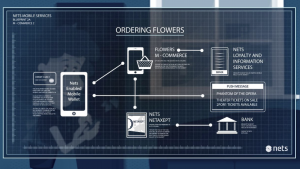 For the introduction of one of Nets’ newer products, the digital wallet, we helped kick-start their communication. We made the first film as a teaser about 6 months prior to launch, focusing on communicating the benefits of the wallet.

As we approached the launch there was, however, a need to communicate more specifically about the product and the inherent system behind it. And because the target audience consists of technical personal within the financial business, we produced a movie in two parts. In the first half we showed how the consumer will experience a digital wallet and all it’s benefits. In the second part we “rewound” the film and stopped at key scenes to show the technical set-up.

We have designed a visual universe for Dansk Metal, which have been used to communicate a variety of topics. From appealing to members to vote on the new collective agreement, to prepare employees to the implementation of a new big IT-project and finally to “campaign” for the Unified Patent Court, on media such as eb.dk and bt.dk.

Every case was produced in the same style and thus with a large degree of visual recycling, so to speak. Both to create a uniformed expression and overall coherence, but also to reduce the budget from case to case. That is of course cheaper than having to design a new style every time, as it shortens production time. At the same time, we handed over the graphical project-files to Dansk Metal, in order for them to use the elements in other media; such as posters and employee magazines.

When the animated information film is being constructed, the balance between words, icons, animations and speak are crucial. It’s a process that involves careful deliberation concerning how to best and most effectively facilitate information and key benefits in relation to the target audience. When constructing a story and a line of arguments tables, pictures and drawings each have their place. And when the content of a story comes together in a seamless flow from these different areas, it’s much easier for the viewer to decode, understand and use the content going forward