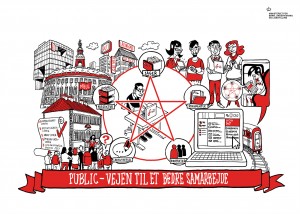 Infographics is a very powerful tool for making a message stick. It works great on its own as a quick description of a specific correlation, and it also works great in combination with a film.

After a film has been produced it’s easy to create an effective infographic from the content, highlighting the important aspects of that film. This is a method most commonly employed to remind the audience of a film they’ve already seen. In this way, a film and an infographic (printed on posters or postcards) can be used strategically to support one common message. And if used correctly, that message will stand out in the mind of the audience. It will stick and have a much bigger chance of affecting their behaviour.

This is one way of using infographics – as a supporting element derived from a primary concept. Another way, is to use infographic on its own, either printed and distributed or digitally online. Here the conceptual development needs a lot of attention to have the desired impact. It’s a matter of telling the bigger story in few, but very precise visuals. Pictures and text are combined to emphasise the message, using symbolism and psychology to direct attention and capture the audience.

With the right infographic, used in the right way, you can achieve a lot, using something that looks really simple. And that’s the point! Just like a hit song, it’s usually a very simple melody that does the trick. But it needs to be the right melody, with the right beat and the right feel to it. It needs to be engaging, get you moving and it needs to stay with you long after you’ve turned off the radio. That’s what a great infographic can do.

So, whether it’s a question of maximizing the effect of a film – reminding your audience of the key elements in a new strategy or the implementation of a new digital solution – or if it’s a question of communicating a specific relation either in a magazine, on the workplace or online, an infographic is an effective tool to bring about behavioural change.