“Statement-films” are what we label film, where top management, often times the CEO, communicates key messages to a large target audience. The “Statement-film” is a good format to present the main elements of the latest financial statements, a yearly round-up, a new strategy or other business ventures. The presentation can be supplemented with animated graphics, pictures and key words.

“Statement-films” are typically 4 to 6 minutes long. And if it’s the type of film that’s centred around presenting financial statements, the target audience would typically consist of private or smaller shareholders, who don’t have the time to read a lengthy annual report or see a webcast, but still want to stay up to date.

The film provides the company with the opportunity to:

– Deliver messages in a rich visual way, that supports the company’s professionalism and visual profile

– Show the “statement-film” at the general assembly

If the “Statement-films” are presenting a new strategy or an internal status, then the target audience would typically be the company’s employees.

This type of film has particular value when:

– Employees are located in different locations and maybe even in different countries. The film can ensure that key messages are being delivered consistently to all employees, to eliminate misunderstandings and misinterpretations. For instance, when middle management is conveying top management decisions and directions.

– When the messages are complex, and therefore need to be supported with visuals. Further, it’s possible to do several “takes” to ensure that key messages are delivered perfectly.

– When a message has to be delivered at an exact moment and the CEO can’t be in every affiliate or at every location, for instance, in connection with a mergers & acquisition etc.

The films manuscript will typically be written by the company’s communication department and by Bulldog and Partners. This ensures that the content is in line with the company’s values and strategic goals. Where your company typically knows the content and the right tone-of-voice, Bulldog and Partners can help translate that into something that works on camera. When the script is finished we create a storyboard. The storyboard shows which visual material we will show in the film at key points. It can be anything from graphs and numbers to pictures of employees, products and production facilities.

The financial statement films are recorded in a green screen studio, with the use of a teleprompter. That provides maximal flexibility in relation to the visual style and ensures that key messages are delivered in the best possible way. The recording lasts 1-2 hours, including preparation and tests.

Recording on green screen gives us a lot of different opportunities in post production. We can replace the green colour with a still picture, an animation or a film clip and create a complete environment for the speaker that supports the messages.

The teleprompter is a tool, which projects the manuscript onto a see-through mirror in front of the camera lens. In order for the script to be executed in a safe and correct manner. The trick here is to make the presentation appear as authentic, relaxed and fluid as possible. This is where the experience and skill of the director comes into play. 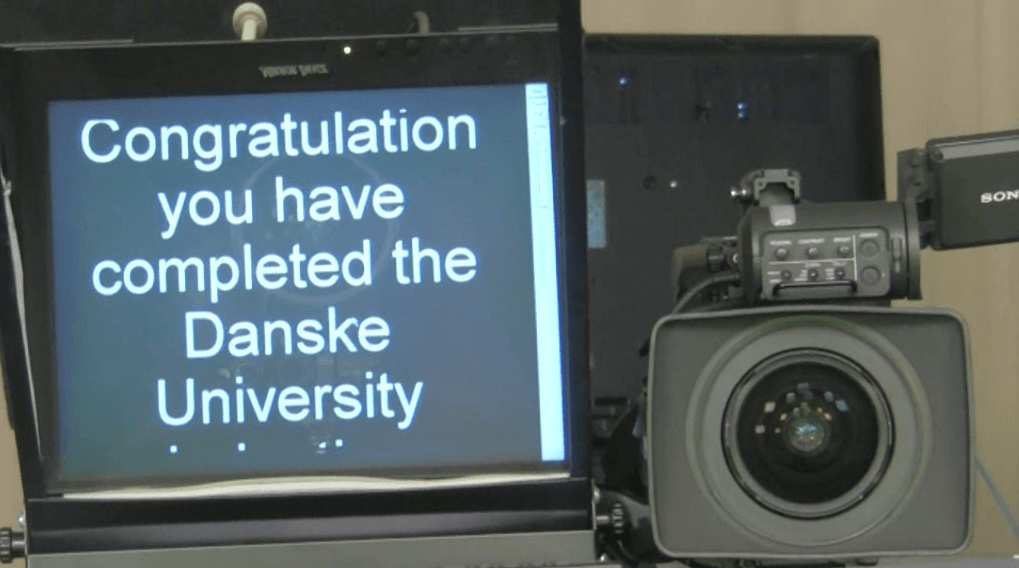 Before and after the recordings, Bulldog and Partners design the frames, backgrounds and animations that support the company’s visual style. At the same time, we make sure that numbers, graphs and key messages are communicated in an easily understandable and visual simple way.

This type of film is produced efficiently and in turn the production costs are fairly low. If you wish a price indication then write an email to nikolaj@bandp.com with a short description of the estimated length, purpose and target audience.

A financial statement film supports the recommendations for good corporate governance by:

Bulldog and Partners are continuously making “Statement films” for NORDEN, VELUX, FOSS, EAC and ALM. Brand, among others.